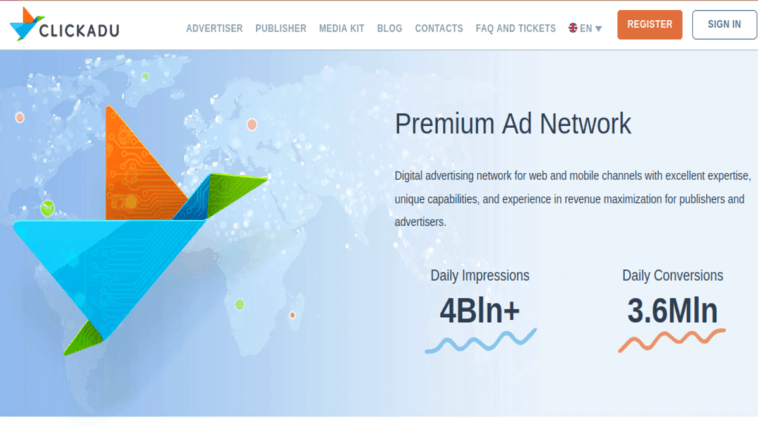 In this Clickadu review for publishers, Clickadu is a rapidly expanding ad network that generates tens of thousands of impressions every day. Previously, Clickadu focused on pop-under advertisements, but now enables revenue through five other ad types.

Since its debut in 2014, they have been serving advertising and publications all around the world and have been extending its reach. Publishers have marketed their monetization services as one of the most converting ad kinds accessible.

Their objective, 360 Ad Coverage, offers their publishers an advantage over many of the more well-known ad networks. Advertisers and publishers cannot deploy pop-under advertising through the AdSense network hence limiting usage with Adsense ads.

The setup is basic and straightforward. In this Clickadu review for publishers, its simple installation, paired with an approval process that takes 24 hours or less, makes it one of the simplest networks to join. It’s an excellent choice for individuals who are just starting started with internet advertising or who don’t yet have enough traffic to support more traditional ad types.

They have a $50 minimum payment snag and provide payouts twice a week. Each pay month, as long as you have at least $50 in your account, you can withdraw your cash. They pay on a Net7 and Net14 basis. You will be able to get all of the accrued advertising money in your account once it reaches $50.

Advertisers and publishers are not permitted to utilize pop-under advertising through the AdSense network. So it is not compatible with the Adsense ad network. With this Clickadu review for publishers, We’ll walk through the ad formats and best revenue earning process.

For the time being, there are five advertising formats to choose from;

All of the standard display ad types are available. Have those little messages come up on your screen while you’re not even on the internet? That’s all there is to it.

There are several significant benefits of using Push Notifications:

The ad becomes native at this point. Instant Text Message resembles a system mobile notification, but it has two CTA buttons that allow consumers to choose whether or not they want to respond.

The format offers its publishers an advantage over many of the more well-known ad networks.

When the user closes the page, they will appear in front of them. These advertisements are non-intrusive since they do not detract from the user’s experience while they travel around your website. Instead, they capture the user’s interest after they’ve opted to leave your site.

Video in the Foreground (Pre-Roll)

If you use a video streaming or hosting service daily, you will almost certainly come across video advertising.

A pre-roll video is a brief promotional film that plays before the main video content. Is there something you don’t like about what you’ve seen? A 5-second ‘Skip button’ allows you to ignore unfavourable content. In this Clickadu review for publishers’ time, they had improved the Video advertisement with more CPM.

This advertising style, on the other hand, is for affiliate marketers who are experts. Thingy assists marketers in obtaining the highest-quality traffic, therefore it’s pricey as hell but needs quite a bit of talent to integrate properly.

The Exoclick is a network that is similar to this one. Clickadu is a close but superior alternative to PopTM in our opinion.

In this Clickadu review for publishers, Clickadu rejects sites that employ phoney traffic or clicks, even if the impressions or clicks are not affected. If a publisher is found to violate these conditions, their account will be cancelled and they will be barred from using the network in the future. 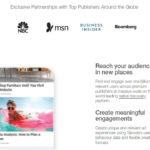 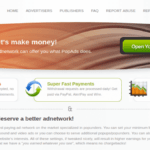