Just in time for the holidays, Mariah Carey delivered for CBS.

Mariah Carey wishes everyone a Merry Christmas in her particular way.

According to Nielsen’s data, the special was victorious in each of its half-hours among P2+ viewers, attracting 1.1 million more viewers than its nearest competition in the period.

The viewership competition was won by CBS.

The two-hour event that was recorded on December 13 at New York’s Madison Square Garden was available to stream on Paramount+ and CBS TVE (CBS.com and the CBS app), and it rated as the No. 1 most live-streamed entertainment show on the platforms Tuesday.

Additionally, it garnered more than 61 million social media impressions during the night. 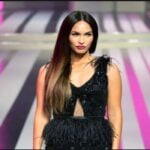