Gertrude Mwita, alias Kibibi, of the telenovela “Huba”, has revealed that her late mother was married to another woman. Getrude Mwita said that her mother followed their customs in doing so.

In a question and answer session with Ayo TV, the actress and video vixen discussed:

“My mother was married to another lady. Tradition dictates that if a man is married but unable to procreate, he may marry a woman to assist him in doing so,” Getrude Mwita said.

“Additionally, you must be affluent. You have the option of marrying two, three, or four ladies. A specific lady contacted the family of my mother and announced her intention to wed them, offering 40 cows as dowry.”

“My mother was to remain in that household and have children; she was not to be remarried to anybody else.”

“There were 7 of us, but 3 of us died. My mother’s ‘Woman’ husband was married, but the two of them were childless.” 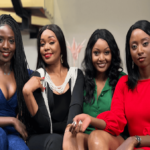