As she celebrates the first year in Marriage Media personality Fridah Mwaka with her husband Samuel Nguma Ndhuli explains why their marriage life has been underground.

“I keep my marital affairs in check. Fridah Mwaka is a brand on its own. We do not talk in public domestic affairs. We agreed that matters to do with my career is my Life, ” she said.

There have been talks of why the KTN Presenter Fridah Mwaka has never used her husbands’ name in public.

“There are people who are left saying that a man feels pride when his name is mentioned. If your pride as a man is to hear your name mentioned then I don’t know, ” she said.

“I first met my husband in 2001, we were kids. He was a flower boy and me, flower girl at a wedding and then our parents were at the wedding too, ” she added.

” That is almost 17 years ago. However, on the wedding day, bloggers wrote we have dated for 17 years. How can I date a guy for 17 years yet we met when we were children? ” the KTN Presenter Fridah Mwaka posed.

“We met when we were young and went to primary school together in Kilifi. Then we are neighbours at home, but everyone followed his life, ” she added.

For like 13 years there was silence everyone was busy with their life even though when we occasionally met at home, we would just say hi and that’s all, ”she narrated.

They reconnected years later soon after she joined KTN, a romantic affair developed, and the rest is history. 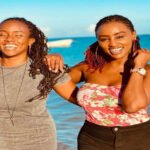