Abdu Kiba clear the air on media over his brother Ali Kiba and Nandy astonishing behind the scenes video attitude after drama with his in-law Aileenalora.

Bongo celebrity Alikiba’s younger brother from Kings Music Records, Abdu Kiba has broken the silence on what is going on online about Nandy and Alikiba’s video.

He added that the video has caused misunderstandings and confusion in the marriage of his brother and his in-law Aileenalora.

He was responding to the incidents that went viral on social media about the actions of those behind-the-scenes videos in Nandy ft Alikiba nibakishie song.

Abdukiba said, “I can’t answer the issue of Ali and his wife because I don’t have them. “

” I don’t know what’s wrong, but in the family, there is no problem because they know we are musicians, ” he added.

” Before we do anything, we will also get permission from our Mamas even though it seems and feels there are different actions, ” he said.

” I also saw a social media post. Its there marriage and consensus is key in everything. His wife was there during the video shooting. Nandy boyfriend Billnass was also there during the same shooting, ” he concluded. 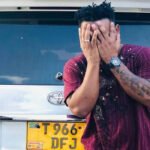