How accessing Bongo star Zuchu is now a nightmare? Fans have reacted on the new WCB protocols.

You are told that even a fly does not interfere or cross where Bongo star Zuchu is.

Zuchu now becomes the new superstar in Tanzania that has covered and put all other female celebrities in Bongo to underground.

Zuchu has more than 10 bodyguards. She is out of bounce for people who want to hang out with her with a written request.

To reach Zuchu, you have to work extra hard to penetrate the group of elite bodyguards with written permission from WCB. At least six bodyguards accompanied her in every move.

The worst thing that has ever happened to Bongo stars is when Zuchu is in her circles and endeavours she accompanied.

She has protection even in restaurants, salon, mall and every move including visiting her secret boyfriend.

Unlike the past, taking a photo without prior consent from WCB is highly prohibited.

It is not easy again like it used before to approach Zuchu rated as the top new star in Tanzania. 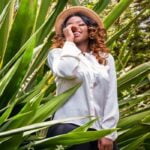