Scott, who was previously known as MacKenzie Bezos, also announced her new last name, which she said was taken from her middle name.

Last year, Scott signed the Giving Pledge in a commitment to donate the majority of her fortune after her split from Bezos – the world’s richest man – left her with a 4% stake in Amazon.

“Like many, I watched the first half of 2020 with a mixture of heartbreak and horror,” she wrote in a post on Medium.

“I began work to complete my pledge with the belief that my life had yielded two assets that could be of particular value to others: the money these systems helped deliver to me, and a conviction that people who have experience with inequities are the ones best equipped to design solutions,” she added.

At the time of the divorce, her stake was worth about $36 billion. Her fortune has grown to over $60 billion with a jump in Amazon’s shares this year. 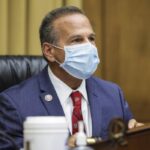