Ennio Morricone, one of the world’s best and most creative composers of film achievements for spaghetti westerns, died in Rome on Monday at the age of 91.

Tributes sprinkled in for the man who composed the music for about 500 films, including his old childhood friend Sergio Leone’s 1966 epic “The Good, the Bad and the Ugly” and Quentin Tarantino’s “The Hateful Eight” for which he finally won an Oscar in 2016.

“He made us dream, he moved us and made us think, writing unforgettable notes that will remain forever in the history of music and cinema,” he said on Twitter. 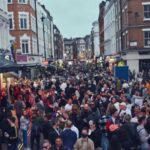